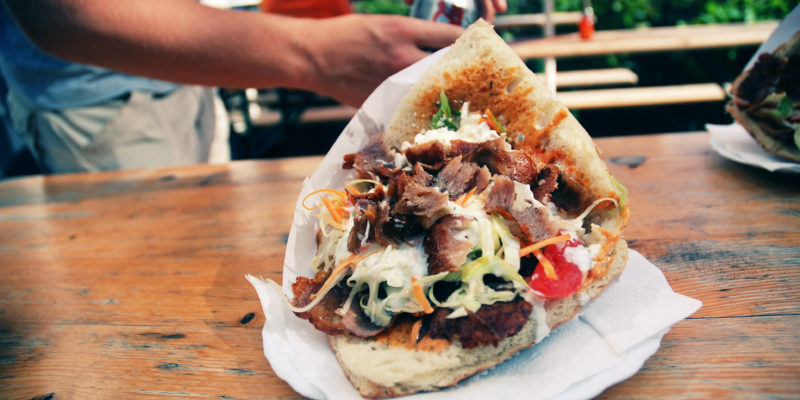 With all the bad news coming out of the restaurant world this week, we needed a good meat on a spit story with a happy ending.

Europe’s kebab war is over and German-led forces won it — just barely.

The European Parliament voted on Wednesday to allow phosphates in meat cooked on spits. The European Union assembly’s Christian Democrats, dominated by allies of German Chancellor Angela Merkel, fought off opposition to the deregulatory step by left-of-center political groups and consumer organizations.

The critics in the Strasbourg, France-based EU Parliament came up three votes short of the absolute majority needed to prevent the looser regulation, mustering 373 votes. While phosphates keep kebab meat juicier for longer, opponents have cited a possible link between these additives in foods and cardiovascular disease.

Kebabs joined a long list of EU disputes over the years about the safety of foods such as hormone-treated beef, chlorinated chicken and genetically modified organisms. Centering on Europe’s better-safe-than-sorry “precautionary principle,” the controversies have variously pitted the EU against trade partners such as the U.S. and European nations against each other.

The European Commission, the 28-nation EU’s regulatory arm in Brussels, proposed an end to the bloc’s ban on phosphates in “frozen vertical meat spits” and picked up the support of member-country governments. That left the 751-seat EU Parliament as the last hurdle for the change in rules.

The assembly’s environment committee opposed the commission proposal, saying the status quo should be maintained at least until the European Food Safety Agency publishes the results of a study on the matter. The full chamber ended up throwing out the environment panel’s recommendation.

Kebab meat now becomes part of a limited group of exceptions to the EU ban on phosphates in “meat preparations.” These include breakfast sausages, burger meat with a certain minimum vegetable or cereal content, and Finnish grey salted Christmas ham.

This article was written by Jonathan Stearns from Bloomberg and was legally licensed through the NewsCred publisher network. Please direct all licensing questions to legal@newscred.com.