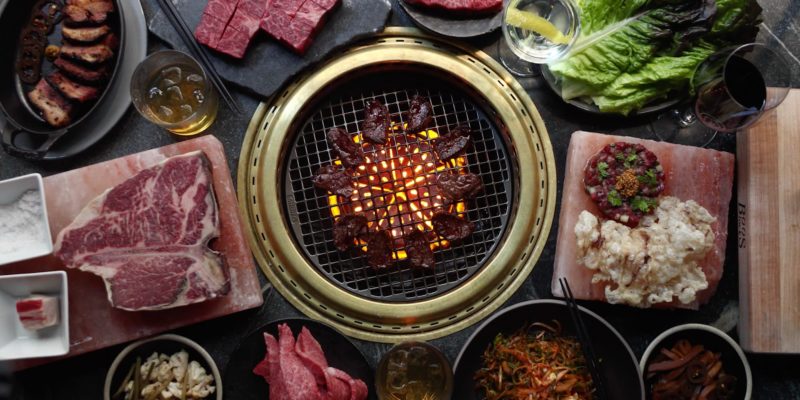 The in-restaurant experience is changing, and it’s a direct result of new technologies aimed at making our lives simpler. Sometimes the tech creates a threat, as has happened with delivery. And sometimes it creates opportunity, as we see in the ways smart restaurants are addressing said threat.

Cote, a Korean barbecue in New York City, has taken the already communal dining experience and heightened it through lighting and other design elements. / Cote NYC

Speaking at Skift Global Forum in September, Union Square Hospitality Group CEO Danny Meyer made the restaurant industry sound like an easy puzzle he had already figured out.

“What’s working today is what’s always worked,” he said. “I don’t think we are going to want to stop being with people. As long as human beings remain the tribal creatures that we’ve always been, we’re going to crave high touch just as much as high tech. We provide, at our best, an opportunity to come together with people.”

When you’re New York City’s most well-known restaurateur — not to mention the man behind Shake Shack — you can get away with saying things like that. In fact, most people believe you when you do. But for a host of other restaurants, maintaining business and attracting new guests amid challenging economic conditions means coming up with ways to differentiate time spent inside a restaurant versus time spent with just the food.

In the third quarter of 2017, same-store restaurant sales declined by 2.2 percent and same-store traffic fell as well, by 4.1 percent, the second-worst rates in over five years, according to TDn2K’s Restaurant Industry Snapshot. Still, the National Restaurant Association projected industry sales of nearly $800 billion in 2017, so there are clearly restaurant dollars to be found.

At the same time, both publicly traded and venture capital-backed delivery companies are growing at a rapid clip, and shelling out millions on marketing with no plan to slow down. In October, Grubhub closed its acquisition of Yelp’s Eat24, creating a 75,000-restaurant network of delivery and takeout options neatly baked into sites across the web. Links to quickly order takeout and delivery via Grubhub live on review and ratings sites like Yelp and TripAdvisor, through Grubhub’s own channels, and through restaurant websites and social channels.

Success Depends on Creating and Defining a Place

First and foremost, a restaurant — from fast food to fine dining — must become a destination. Now that customers can get the food from a restaurant anywhere they are, businesses must double down on what happens inside.

This could take the form of quirky and iconic design, like tables emblazoned with the restaurant’s name for maximum Instagrammability. It could be a huge mural, unique tile pattern, or other differentiating design feature. It could be really comfortable chairs, the best soundtrack ever, or awesome lighting. But most importantly, this goes beyond just the design-for-Instagram aesthetic that we keep hearing about. Sure, an inviting, immersive space that photographs well is great marketing, but it’s also a way to create a sense of place so crucial to a restaurant’s success.

“Restaurants are communal gathering places,” said Philadelphia-based restaurateur Ellen Yin, co-owner of High Street Hospitality Group. “They are designed to give a complete dining experience from curating the food to warm hospitality, great music, and vibe. If your goal is to just eat, then delivery or takeout is more appropriate.”

At New York’s Cote Korean Steakhouse, Simon Kim spent $250,000 on lighting for the restaurant, which certainly helps how it looks and feels. But it’s the restaurant’s concept that brings guests in the door (and invites glowing critic reviews, including a Michelin star after just five months of operation). His Korean steakhouse concept is made for sharing. “Nobody orders one cut of meat to themselves. Everyone gets to share,” he said. “It brings people together.” Meat is delivered to the table raw, and cooked by guests on a grill, with the help of servers.

Kim has also discovered what is perhaps the ultimate compliment of his in-restaurant experience: “People aren’t really on their phone. The restaurant gets people engaged in cooking and sharing and that social element.”

Not everyone needs to spend a quarter of a million dollars on lights. New York’s Tokyo Record Bar was carved out of a basement and decorated on the cheap. The restaurant is reservation-only and diners pre-pay via Resy for its two prix fixe seatings a night. Before ordering drinks, they are told to request songs on small pieces of paper, which the DJ/owner uses to piece together the meal’s soundtrack. At the end of the night, the bill arrives handwritten in a notecard that serves as a memento of the evening. The dinner is an experience that can’t be replicated at home, and at $50 a person, it doesn’t break the bank either.

“You have to sell people a culture, something they want to be a part of,” said restaurateur Eddy Buckingham, co-owner of New York’s Chinese Tuxedo. “It can start with something as simple as your address,” he said, referring to his modern restaurant’s traditional Chinatown location. “This is where restaurants will always have an advantage over the alternatives, but you must be deliberate and exceptional at executing it.”

Smarter Technology Will Change the Game

Restaurants are also looking to new technology to both enhance and — in some cases — define the in-restaurant dining experience. Our thinking about digital connectivity and physical service has completely changed, just like it has changed the way we hail a cab. In the same way, restaurants are using technology to power much of the guest experience. For some restaurants, specifically fast food and some fast-casual locations, tech is front and center, providing assurance that these chains understand and embrace new methods of ordering and interacting. Touch-screen ordering, cashless transactions, and more personalization can make the experience more exciting for a guest.

There’s also the question of what to do when the out-of-restaurant experience works better than what’s inside. For example, according to Shake Shack CEO Randy Garutti, average customer spend at the chain is higher on orders placed via the Shake Shack mobile app than in stores. One idea: Replicate the app experience in the store, with touch-screen ordering instead, as Shake Shack does in one of its New York locations. (It’s still too early to know if the touch screens have the same effect as the mobile app, though Garutti says initial feedback is very positive.)

At sit-down and fine dining restaurants, it is the opposite: Many of the technological break-throughs that help to improve the experience happen quietly in the background. A restaurant’s reservations and point-of-sale system are the starting points here, not only storing guest contact information, preferences, and other details, but also providing useful application programming interfaces and technological tie-ins to other services.

Resy co-founder and chief technology officer Michael Montero offered his take on in-restaurant technology at October’s TechTable Summit in New York, explaining how he hopes to use Resy’s point-of-sale system and its associated data to enhance a restaurant’s ability to get to know a guest ahead of them showing up at the restaurant. Resy offers the booking guest the ability to invite other diners in their party to join the reservation. What if, for example, a restaurant knew that when you come in with your spouse, you preferred relaxed, slower service, ordering wine by the bottle, and leisurely lingering over espresso? What if that same restaurant knew that when you come in with your boss, you want quick service and no offer of dessert or coffee? “None of this information is powerful on its own without connectivity,” Montero said. But when applied correctly, it’s possible for restaurants to provide these specially tailored experiences.

Good design plus smart technology will lead the way to elevating the guest experience this year, working together to create not only the experience diners have come to expect, but one they want to enjoy.