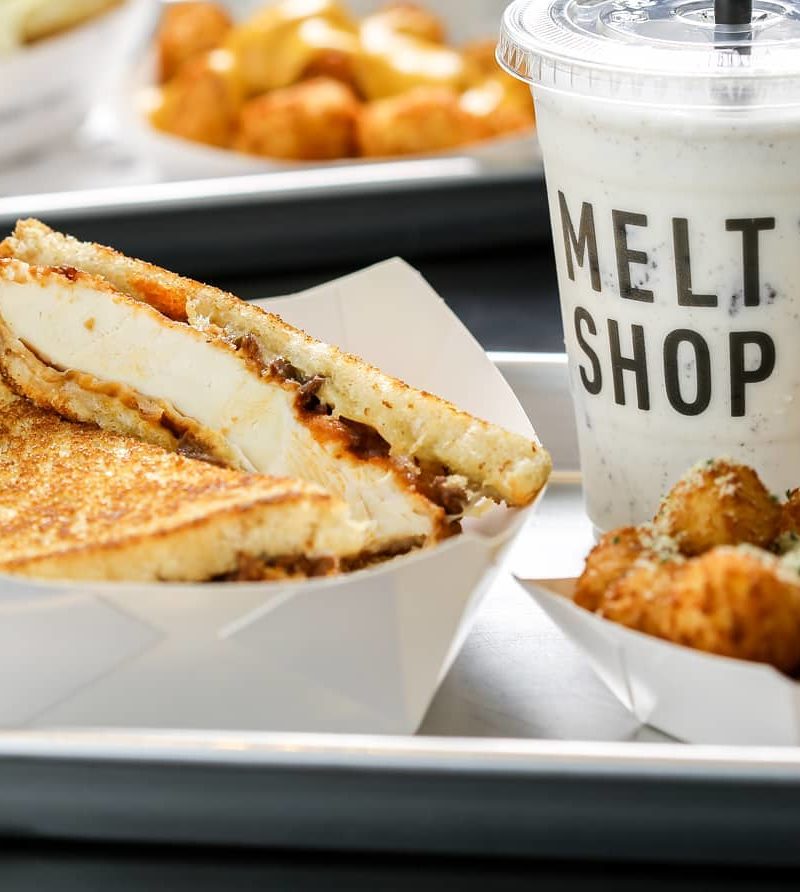 Melt Shop only opened its first international restaurant, in Kuwait, in January, and already debuted a second location there in April. CEO Spencer Rubin discussed what it takes for a budding chain to make an overseas debut.

The Melt Shop had to modify a few of its items for a Kuwaiti audience (but not this buffalo chicken sandwich). / Melt Shop

Kuwait is home to some of the largest and most recognizable American restaurant chains, among them Applebee’s, KFC, McDonald’s, Pizza Hut, Subway and many others.

New York City-based Melt Shop, which debuted its first international location in Kuwait in January and opened its second unit in the Middle Eastern country in April, is one of the latest newcomers to the scene.

While Melt Shop is smaller than many of the legacy American chains already established in Kuwait and elsewhere around the world, with a total of 10 restaurants, founder and CEO Spencer Rubin said the concept brings a differentiated product — American-style melted sandwiches — and service style — fast casual — to the market.

“Every major American brand you can think of that has an international presence, it seems they have a presence in Kuwait,” Rubin said, citing American coffee, burger and pizza chains. “But the more we looked, we realized there weren’t that many fast-casual brands.”

Customers of Melt Shop’s Kuwait location get a strikingly similar experience as their counterparts in the U.S. “Our process is our process, and I think that’s what makes our brand and operations consistent and special,” Rubin said.

Operations and service are essentially the same, as is the menu, with some tweaks. For instance, pork bacon was swapped out for beef bacon for the majority-Muslim country’s population, and a Halloumi Melt sandwich was introduced, featuring the cheese which Rubin said is popular in Kuwait.

Ingredients are essentially the same as in the U.S., too, since they must be imported in Kuwait. Rubin described the majority of menu items as “almost identical.”

“It felt like such an accomplishment” to replicate the dishes of Melt Shop restaurants in the U.S. halfway around the world, he said.

Melt Shop has ramped up growth quickly. It only began franchising in September 2017, and Rubin said he has learned a lot from the experience of launching the first overseas location, especially adapting to cultural nuances with business partners and customers, international supply chain management and “literally shipping pallets of product, which is new for us, putting it on ocean containers.”

“It’s really freaking cool, and it’s been a monster learning experience,” he said.

Finding the right pace of growth is important. “You want to move fast,” according to Rubin, but at the same time not excessively so. Still, speed helps when it comes to building brand awareness and gaining an advantage as a first mover.
In Kuwait, “we’re truly first to market in the melted sandwich category,” he said.

Melt Shop is looking to grow around the world. According to its franchising website, it’s open to expansion in Mexico, South America, Canada, Western Europe, Asia and the Middle East. Currently, the latter region is a priority, but Rubin said Melt Shop is also speaking with people in Asia more than any other area besides the Middle East.

Melt Shop partnered with licensee Ali Alghanim & Sons to open the Kuwait restaurants, and Rubin expressed hopes that they would build out the region.

“We feel like there could be hundreds of locations in the region,” he said.

In addition to Kuwait, Ali Alghanim & Sons has rights to develop Melt Shop restaurants in Saudi Arabia and the United Arab Emirates.

Making sure partners like Ali Alghanim & Sons are happy and successful is important to Rubin. Aurify Brands — the parent company of Melt Shop, which is also a franchisee of Five Guys restaurants — has given him a firsthand look at both sides of the relationship.

“Part of the reason we will be so successful is because we see what it’s like to be on other side of the table,” he said.

Skift Table contributor Marcella Veneziale is a journalist and editor based in Zagreb, Croatia. For the past six-plus years, her work has focused on food and the business of restaurants.