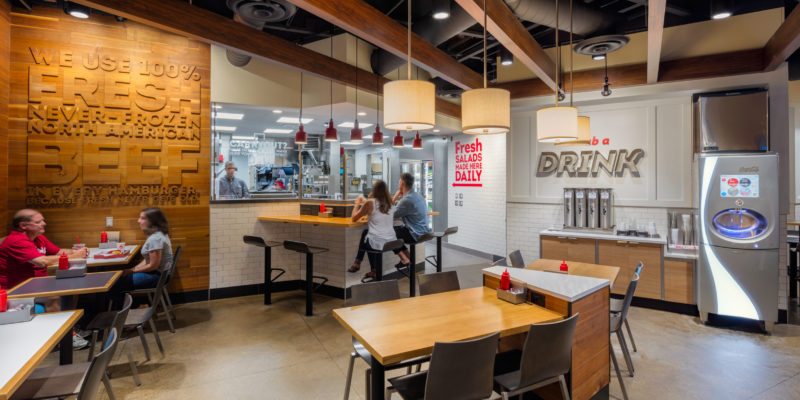 Wendy's has got a lot of great ideas about how restaurant design can display the company's values. Will everybody make the connection between the new communal sinks and Wendy's fresh-never-frozen motto? Probably not, but it's a nice touch to have access to a sink without having to walk into the bathroom.

This past Monday at 10am, a ribbon was cut in Gluckstadt, Mississippi. It heralded the opening of a new Wendy’s location, one that the company was especially proud of. The new Wendy’s has a fireplace tucked into the corner, a 12-seat community table anchoring the dining room, and a cheery quote from Wendy’s founder emblazoned behind the registers: “All of Wendy’s spins off of one word — FRESH.”

The dramatically different look and feel of the Gluckstadt location is part of Wendy’s ongoing new restaurant design strategy. Several years ago, Wendy’s laid out a mission to start remaking its restaurants for the future. The plan involved a top-to-bottom reimagining of how restaurant design affects all parts of Wendy’s operation. Like the competition, Wendy’s is perpetually focused on driving success in a number of key ways, including increasing food sales and restaurant traffic and opening new locations. Store design affects those measures of success just as much as introducing a 50-cent Frosty to the menu.

Currently, there are 6,600 existing Wendy’s restaurants across the globe. “Our first and foremost priority is really to remodel all of those,” Pringle told Skift Table. As a company, Wendy’s has publicly declared that it has a goal of remodeling 70 percent of those restaurants by 2020. So far, Wendy’s has reported that 44 percent of its existing restaurants are remodeled.

The most radical design changes appear in Wendy’s new locations. The company has a goal of growing to 7,250 restaurants by 2020 (which is a change from Wendy’s originally stated goal last year of reaching 7,500 restaurants by 2020). In North America alone, Wendy’s has publicly identified over 4,000 potential areas that could support new restaurants.

For those new locations, Pringle led development on a “Smart Family of Designs” portfolio that initially launched in mid-2017 with the Smart 1.0 program. This year, Pringle and her team have publicly launched the Smart 2.0 program, which features further design upgrades. Currently, the design options break down into four different types of restaurants: the Smart 30, 40, 55, or 65. Each number corresponds to the amount of seats in that restaurant prototype.

Previously, Pringle says that franchisees had only one or two main restaurant prototypes to choose from. The building was typically built from the ground up as a freestanding location that covered upwards of 3,400 square feet, included a drive thru, and sat on an acre of land.

Now, the new restaurants can be built on as little as a quarter-acre lot, and don’t necessarily need to be constructed from the ground up. Pringle says that the new restaurants are being built in converted banks, abandoned competitor locations, and attached to the end of mall lots, where the restaurants are connected structurally to the mall but still offer a drive thru.

“We are trying to think differently and be creative in looking at where the communities are that we want to operate,” Pringle explained. “We want to figure out how to design for that opportunity, rather than saying, ‘Well, here’s Wendy’s, this is what we look like, and where can we fit?'”

It’s All In The Details

Inside the new restaurants, Pringle aimed to distill the company ethos into everything, right down to the communal sinks that the company is introducing in its Smart 2.0 design portfolio. The sinks are positioned outside of the bathroom for easy access, and aim to support Wendy’s constantly-hammered-in motto of fresh never frozen beef.

“People are able to come, wash their hands, freshen up, and they don’t have to go into the bathroom,” Pringle said. “It’s really built around the idea of cleanliness and being fresh. It’s an important part of our design that was not in Smart 1.0.”

The new design prototypes are relentlessly focused on customization specific to each location. Wendy’s is working with a service provider to analyze what kind of music is popular in each new restaurant area, and building site-specific dining room playlists around that data. The type of seating, from communal tables to booths to high tops, is chosen based on the restaurant’s main clientele — if it’s located next to a high school, the communal tables make more sense. If there’s a retirement community around the corner, add more booths. “We wanted people to feel like it wasn’t a cafeteria,” Pringle noted.

The new kitchen prototypes are open layouts that address operational hangups. The fryer was moved next to the grill, for example, to cut down on the number of steps an employee needs to take from one station to the next. At the counter, order pick ups have been completely separated from the order pay area to encourage a more efficient flow of customers.

Order kiosks are, of course, a growing part of Wendy’s customer operations moving forward. The kiosks were an optional add-on in the Smart 1.0 designs, but now are fully integrated in the Smart 2.0 prototypes. Pringle confirmed that there’s “a good chance” that future Wendy’s locations will only take orders on kiosks, due to how well the system has gone over so far. Pringle noted that, according to data gathered from Wendy’s customer feedback surveys, satisfaction ratings are higher at restaurants with the kiosks versus those that haven’t installed the technology yet.

Similar to its competitors, the vast majority of Wendy’s restaurants are owned by franchisees, which means that these company-led upgrades are great on paper, but the company won’t be able to hit the ambitious expansion goals it has set without enthusiastic operator support. All Wendy’s franchisees are required to undergo the store remodeling as outlined in the company’s image activation plan, and as of this year, all new restaurants must be constructed using the smart design prototypes.

So far, Wendy’s hasn’t had to enforce compliance on any of the design updates. The upgrades are proving to have great returns for franchisees: sales are higher in the new locations, customer traffic numbers are up, and employees are easier to retain. Since Wendy’s started investing in the remodels, the company has signed on 60 new franchisees. (Wendy’s has about 350 franchisees total in North America).

Stanley Chin has been a Wendy’s franchisee for 30 years, and currently owns and operates four restaurants in New York City. Since undergoing the image activations, Chin confirmed that he has seen noticeable sales lifts, more operational efficiency in the kitchen, and happier customers overall. When the upgrades were completed, Chin told Skift Table that neighborhood customers came up and personally thanked him for improving the look of the restaurants. He is currently considering building out a fifth location using the Smart 40 prototype.

“I like to say that growth is magic, so when you can see that things are working and people are energized, then it fuels another wave of growth,” Pringle said. “I’m really pleased that that is happening because we know that when people are excited about what they are investing in, that will help drive more reinvestment and grow the brand.”

Will this be enough to save Wendy's lagging comparable store sales and overall revenue growth? It sure hopes so.