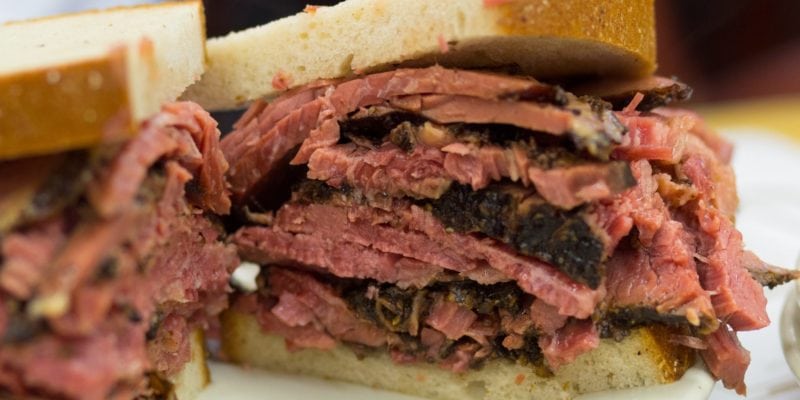 The price point is interesting here. Clearly, Katz isn't positioning its product on the high end rather than competing on price. Smart.

Third-generation deli man Jake Dell is taking the iconic Katz’s Delicatessen across the U.S. and into the 21st century without losing its New York roots or an ounce of fresh meat juice.

As part of its 130th anniversary, Katz’s announced on Tuesday that its first-ever subscription service will start in June. And for pastrami super-fans with an event to plan, there will also be “Big Ticket” items, a play on the paper carnival ticket that serves as your check at the deli. “The ticket,” said Dell, “is an integral part of Katz’s when you walk in.” (And it comes with its own rules—the cause of many a Yelp rant when one gets lost.)

Dell, 31, said he’s been wanting to launch these programs for years, but it has taken a while to nail the logistics, “especially for our regulars who’ve moved away but want to recreate that classic Katz experience at home.”

From the smells and flavors of its slow-smoked 30-day pastrami which is brined, spiced, smoked, boiled, steamed, and then hand-carved on the spot, to the style and feel of the Lower East Side delicatessen, Dell’s team have been test-driving and perfecting for home-delivery the process, the tech, and the shipping. They’re ready.

“You smell the garlic as soon as you open the box,” said Dell. “If that alone doesn’t trigger something in you, I don’t know what will.”

The only thing that’s missing is Katz’s wall after wall of framed photos of famous actors, singers, and comedians from its heyday as a community hub for newly arrived immigrants. From 1888, Katz’s was a neighborhood gossip spot and rendezvous point for Friday night franks and beans. Then, Katz’s bustled with the day’s top talent from a slew of 2nd Avenue Yiddish theater companies and the National Theater on Houston Street. During World War II, with three Katz sons serving in the armed forces, what started as a family custom quickly became the company slogan: “Send a Salami to Your Boy in the Army.” Generations later, that tradition expands.

Subscription boxes (from $1,500 for a full year, or $450 for 3 months) are tied to the season and feature enough food for 4-6 people plus Katz schwag. A July Griller Package is heavy on sausages, ’kraut, mustards, and a Katz’s ballcap for backyard living. The January Warmer Package includes six quarts of three different soups (matzoh ball, split pea, chicken noodle), plus knishes and a sweatshirt. A Sweets Package in May includes babkas, rugelaches, black and white cookies, and a chocolate egg cream scented candle for Mom.

Subscriptions can also be customized, perfect for when you need Katz to slip you the tongue on rye. They’re the logical progression of Dell’s mission to expand Katz’s reach, first across the East River into Brooklyn’s DeKalb Market Hall, and later around the country via collaborations with top restaurants. Dell’s “Pass the Pastrami” campaign challenged great chefs to incorporate pastrami into their dishes. One of Food & Wine’s “Eat This Now” segments was about a Marc Vetri carbonara starring Katz’s meat.

Big Ticket Items are tiered in Bronze, Silver, Gold, and Platinum, from $995 to $9,995, and range from swanky picnic to your own Katz’s pop-up. At the tip-top, the so-called Platinum “VIP Experience” includes 100 lbs of pastrami, 30 lbs corned beef, 10 loaves of deli rye bread and about another 100 lbs of other deli-ghts. Katz’s will even fly two of their veteran cutters to your event to slice and serve onsite. That’s enough vittles for 150 people, plus giftable tees and a Katz’s Yeti cooler to top it off.

“The custom shirts, all the meats, and our cutters flown to your backyard. It’s really freaking cool,” said Dell. “We’ve always thought of ourselves as the best sandwich you can get, so anything that comes in that package should also be the best.”

As a bonus, buyers also receive “Golden Ticket” VIP card whereby they can cut the line at Katz’s for one year. With all of the speed and efficiency you’ll gain, plan on tipping extra and comping a few knishes for those behind you wondering exactly what kind of deli deal with devil you’ve made.

This article was written by Jason Tesauro from Bloomberg and was legally licensed through the NewsCred publisher network. Please direct all licensing questions to legal@newscred.com.