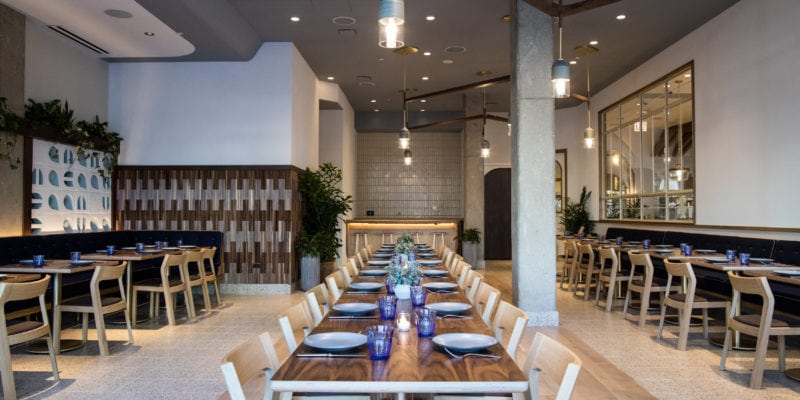 Both independents and chains are looking for better ways to engage an audience with design. Fortunately, consumers are looking for something new from restaurants, too, and are receptive to fresh ideas.

Though its name might suggest that it’s running behind, Pacific Standard Time, a new restaurant in Chicago’s River North neighborhood, is forward-thinking.

The eatery, opened in May, is a collaboration between the Chicago-based One Off and Underscore hospitality groups. It’s the latter’s first endeavor, for which partners Erling Wu-Bower and Joshua Tilden joined forces with One Off’s Donnie Madia, Terry Alexander, and Paul Kahan, the team behind such Chicago success stories as Big Star, Dove’s Luncheonette, The Publican, and Nico Osteria.

Wu-Bower was a James Beard finalist three years running as Nico’s Chef de Cuisine before deciding it was time to open his own place. He wanted to forego the precision (a.k.a sous vide) cooking he so often applied in the kitchen at Nico (and at Kahan’s Avec and The Publican before that) in favor of a more rustic approach; this desire ultimately shaped the restaurant’s interior.

As Tilden explains, Wu-Bower “fell in love with the concept of fire” and hosted an original pop-up dinner series inspired by it at Chicago’s Experimental Station, a nonprofit incubator on the city’s South Side. Using the space as a test kitchen, he experimented with pizza dough that would later appear on the menu at Pacific Standard Time, where two large, hand-built, wood-burning hearths are on display in the open kitchen. One is used for pita and pizzas, while the other is dedicated to grilling fish and vegetables. The rest of the daily-changing menu is also informed by Californian cuisine, food Wu-Bower grew up cooking with his mother, food writer and chef Olivia Wu.

Tilden and Wu-Bower both wanted to achieve a residential feel with Pacific Standard Time, to create a space that felt inviting and comfortable. As Wu-Bower explained in an earlier interview with Resy, “We wanted it to feel like a home… As opposed to doing a regular kitchen counter, which would be at bar height and would [tower over] the counter where the cooks make the food, I wanted it to feel like an island in somebody’s home — because, where do you always gather for a party? Everybody’s always around the kitchen island at a party.” Accordingly, the kitchen and dining room counters were designed to be at the same height, as were all the tables in the restaurant’s back section, allowing for guests to peer into the kitchen and view food prep with ease.

PST’s airy, light-filled interior makes it a unique space, an intentional deviation from what Tilden identifies as a more “conventional Chicago archetype” of dark wood and leather, with filament bulb lighting. Instead, at PST, what Tilden identifies as “not super heavy” menu items are complemented by “light” design touches, too.  As he explains, “light is at a premium, so we wanted to have as much natural light as possible come in through the windows”. Madia elaborates: there are only 200 days of sunshine a year in Chicago, “instead of 310 in sunny California.”

The expansive space emits Californian vibes in other ways, too. Citing the mid-century modern case study homes of Southern California and the iconic Parker Hotel in Palm Springs as significant design influences, Madia identifies the restaurant’s incorporation of decorative breeze blocks, precast concrete textile blocks that were popular in mid-century architecture, to separate space. Their pattern in the restaurant helps to achieve cohesive branding by carrying over to the restaurant website’s homepage, too.

Other attempts to make the expansive, 8,200 square-foot space feel warm and inviting include the use of mixed materials, like exposed wood beams above the marble bar, terrazzo and wood floors, and plaster walls (instead of drywall), as well as varied seating heights. Booths along the perimeter and seat cushions inject some contrast and color into the airy and bright space, while planter boxes scattered throughout add some greenery.

Madia identifies various zones of activity achieved by segmented table types to help “create energy pockets” within the enormous space. Decisions to open the bar on both ends and locate service stations throughout the restaurant were intended to create smoother work flows. There’s a private dining room, too, that seats 62 and affords more privacy and quiet than the rest of the space, but has a flexible wall that allows it to open up to the main dining room.

While Tilden admits that everything would be custom-made in an ideal world with no budgetary constraints, practicality demanded that the team prioritize its customization.

Accordingly, the restaurant’s design team at New York firm Parts and Labor created custom bar stools and stools for the kitchen counter, while the dining room’s remaining seats were sourced not only on aesthetics, but on their ability to easily stack. The decision to opt out of custom dishware was similarly related to the bottom line: as an “extremely busy” 215-seat restaurant, it wasn’t feasible.

In the few months that Pacific Standard Time’s been open, it’s encountered design challenges related to those same budgetary constraints. In a Chicago Tribune piece published last week, Tilden admitted that his team had to address a too-noisy interior after the restaurant opened, due to a lack of investment in acoustic design from the get-go.

Intitial sound absorption efforts of laying down rugs proved ineffective, so an audio engineer was consulted to help the team select a noise-dampening product that could be sprayed on the walls without detracting from the design. Conversations and music are, fortunately, easier to hear now.

Tilden has also expressed weatherproofing concerns in anticipation of the upcoming winter, as “there’s a lot of seating by windows and if they’re not draft-proof, we’ll have a problem seating people there”. Given that the distinctly West Coast-influenced restaurant is distinctly not in California, time will tell whether this aspect of the space’s design will require additional intervention.

Chicago’s most notable restaurant group now has 120 restaurants in nine states, but it is picky about the concepts it embraces.