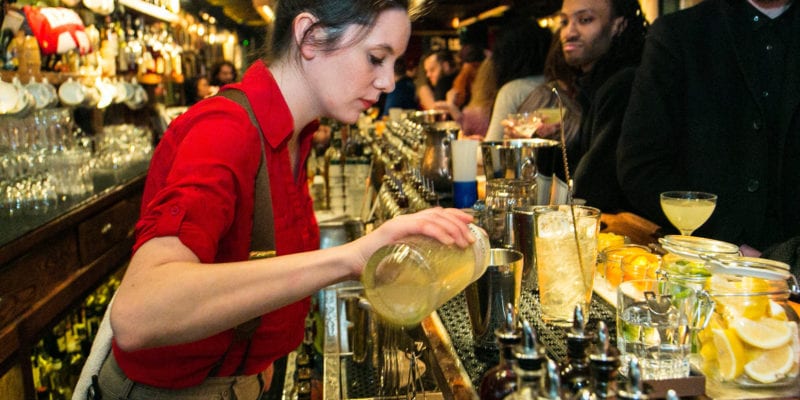 A Costly Investment in Staff Training Technology Pays Off

For the Dead Rabbit's owners, this investment was worth every penny.

Hiring at The Dead Rabbit, a world-renowned bar located in lower Manhattan, is an exhaustive process.

There’s the questionnaire on the application (“Tell us a story about the best place you’ve ever worked. What was your best day there? How did you know when it was time to go?”), an intensive interview to gauge ambition, curiosity, and emotional intelligence, a trial run with the team, and then — maybe — a job offer.

“We don’t just hire,” Jessica Friedman, the Dead Rabbit’s director of operations, said. “We have to hire the right person.” She was in charge of vetting over 700 resumes for about 20 new positions that opened up when The Dead Rabbit completed its lower bar expansion in March. (Friedman made sure that she contacted everyone who applied.)

The hiring process has to be rigorous because once the papers have been signed, new staffers are enrolled in an intensive training and career development program that The Dead Rabbit has been building out as a proprietary online learning management system for the past two years.

“It’s expensive to bring someone on and train them and then realize it doesn’t work out,” Friedman said.

The system is the kind of in-depth workforce management platform that would be an innovative move for a company with 50 locations and thousands of employees. At an operation like The Dead Rabbit, a small company with two locations and 100 staff members, it’s extremely rare.

“Transitioning from paper manuals or powerpoint presentations is a considerable amount of work. To do this on that scale, at their size, it’s pretty impressive,” said David Cantu, founder and chief customer officer of HotSchedules, a workforce management platform that provides a variety of training and management development services to larger restaurant chains. The company currently works with 3 million workers across 170,000 restaurant locations.

In theory, the system is what every restaurant operator wants: His or her vision and core values, broken down and codified so that each particular point can be translated to every employee without the owners themselves taking the time to personally train each new staff member who walks through the door.

In practice, it took hundreds of hours and tens of thousands of dollars to build The Dead Rabbit’s proprietary learning management system. But co-owner Jack McGarry pushed for it because he was convinced of the value of synthesizing everything that The Dead Rabbit was known for — the institutional drink knowledge, the international consumer attention, the world-class bartending skills — and turning it into a pragmatic system that has a reputation for building leaders, not just in the company, but across the industry.

In 2016, the company had just opened Black Tail, its second cocktail bar in lower Manhattan. The expansion required the company to double its staff, and Gregory Buda, a former bartender who now serves as the company’s Director of Education, saw firsthand how hard it was to hire and train effectively while scaling the business.

“We were bogged down in reiterating the same information over and over again every single time a new person would come in,” Buda said. “It’s not time well spent.”

Buda (who holds a Ph.D. in plant biology from Cornell University and is affectionately called “Dr. Moss”) led the day-to-day work of building the online training manuals and education center. McGarry hired a computer programmer based in Melbourne, Australia to build the back-end of the system, and a videographer was brought on board to film a variety of staff training videos.

When Buda started building out the program in earnest, he and McGarry estimated that it would take a couple of months to finish. It ended up taking over two years to bring the system fully online.

From start to finish, McGarry estimated that the system cost between $50,000 to $75,000 to put in place. All of the leadership training courses are now online and clear paths for career advancement are open to every employee. McGarry expects to start seeing six-figure cost savings on turnover within the next year.

Online learning management systems are a routine part of doing business at large-scale restaurant companies like Taco Bell and McDonald’s. Single or small multi-unit operators, however, typically don’t have any of the advantages of time, money, or human resources to build out any type of workforce management platforms that are normal to see at larger chains.

At first, McGarry was hesitant to implement a regulated system that hinted at a more corporate atmosphere. This wasn’t Applebee’s; they weren’t wearing pins and peddling Strawberry Dollaritas.

“But these chains, these corporate entities, the reason why they are so big is because they do a lot of things right,” McGarry admitted.

The learning management system freed the leadership team up to offer more specialized training to those who needed or asked for it, instead of spending empty hours repeatedly training new staff members about the history of the bar or the beer or the comic-book-style cocktail list.

“It’s a big reason that our bartenders stay on for so long,” said Jillian Vose, the Dead Rabbit’s beverage director. “They are learning something new and that’s something that they can apply to their future career.”

“When bartenders leave [The Dead Rabbit’s more refined, upscale bar] The Parlor, they leave to open their own bar or run a beverage program elsewhere,” Buda added. “It’s not just to go to the next bar down the street.”

McGarry counts himself lucky that the investment group backing The Dead Rabbit, HPH Hospitality, wasn’t the type to demand a slide deck projecting the exact financial value of building online leadership training courses before he could deploy resources to work on the project.

He simply started to build the system, and let them know it was happening along the way.

When asked how to find investors with that kind of mentality, McGarry laughed. “I don’t know,” he said. “We’re very fortunate. They trust us and they obviously see the return on their investment.”

Early on in the development of the in-house system, there was talk of building it to sell to other restaurants and bars once the technology was set up and fine-tuned. Buda built it to be able to be stripped of the company-specific aspects and to sell the structure if they want to go that route.

But McGarry is hesitant to explore that path just yet. He’s proud of what the team has built, and he knows it’s an extremely powerful recruitment tool. “We spent the amount of money that we did because it’s a serious perk for the people who come and work with us,” he said.

As it stands, the system will go far in supporting both current operations and future company expansion. McGarry and co-owner Sean Muldoon can more easily weigh opportunities to scale now that the learning management system is in place. A future Black Tail location could be opening up in Miami; The Dead Rabbit may start to pop up in new markets. Onboarding at every level will be easier with a centralized training platform.

“It’s extremely important to be creating these leaders of tomorrow,” McGarry said. “We have the raw talent, but it’s all about treating that talent and looking after it and making sure they are being fed right and held to the right standards.”